Back in December, Search Engine Land ran an article called What You Learn From Talking With Google’s Largest Advertisers All Day, Every Day. Written by Matt Lawson, it’s an interview Lawson did with Google’s chief search evangelist, Nick Darveau-Garneau.

Nick answers questions about trends, automated features such as smart bidding and dynamic ads, and the lifetime value of a customer. He gets into profitability, saying that rather than obsessing over CPA or ROAS, advertisers should look at their profit. I agree with that advice.

He also says, “Buy all the relevant keywords.” Lawson asks, “All of them?” Nick says, “There’s no need to carefully select our keywords anymore. The machine will automatically figure out which of those work for us.”

That got my attention. And I totally disagree with him.

At first glance, the article reads as helpful and forward-looking. We are all going to need automation if we are going to scale our campaigns and keep up with the competition. But when you read deeper into the recommendations in the article, most of them are basically saying “Trust us. We’re Google.”

Here are all the tools Nick suggests advertisers use:

Oh, and don’t forget to bid on all the keywords.

Do you notice a pattern here? Every single recommendation in the article is to just use all of Google’s tools to optimize your campaigns.

I’m not saying that no one should use any of the tools Nick mentioned. In the right circumstances, each of these options makes sense. But I would not use all of them, all the time. I never use optimized ad rotation. I prefer to use third party bid automation tools rather than Google’s bid rules. And dynamic ads and campaigns are a nightmare for B2B advertisers.

I’ve never been a fan of handing Google the keys to your marketing campaign success. I’ve seen time and again where using Target CPA bidding can throttle the volume of your campaign, killing revenue and profit. I would never simply bid on every keyword possible. That is a worst practice, bordering on irresponsible in my opinion.

But hey, trust us. We’re Google.

Nowhere is Google’s arrogance more apparent than with the new Adwords UI. This week’s PPC Chat on Twitter was all about digging in to the new UI. I had a client meeting and had to miss most of the chat, but you can find it on the #ppcchat hashtag. While participants praised a few elements in the new UI, the overwhelming sentiment was that it’s much harder to use, missing key features, and slows down workflows.

Take the Extensions section, for example. Users find the labels confusing and meaningless. 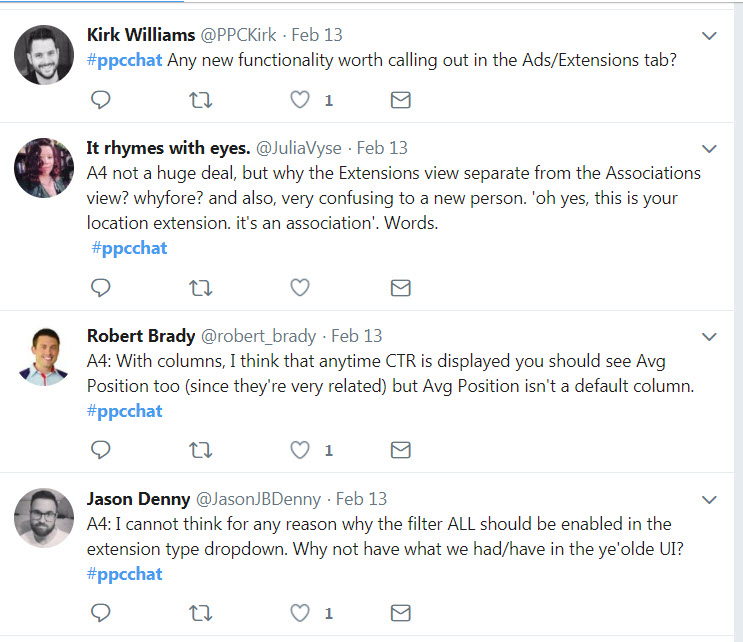 That’s just one example of the many, many issues people have with the new UI. When host Kirk Williams asked for a list of suggestions for Adwords, he got a ton of them:

(I know you can’t read that – just making a point.)

Julie Bacchini sums it up well:

Exactly. GA has moved things around in the past. When the most recent version rolled out, the transition was seamless. It was easy to find what you were looking for. Adwords supposedly crafted the new Adwords UI to act more like GA – but it misses the mark. Nothing is where you expect it to be. Key features are missing or hidden. Custom columns are gone. And there’s horizontal scrolling.

It does not appear that Adwords designed the new UI with input from actual users. But why would they? They think it’s better, so it must be. Trust us, we’re Google.

Do you agree? Or should I put away my cane and stop telling people to get off my lawn? Share in the comments!

The post Trust Us. We’re Google. appeared first on Beyond the Paid.